The China Central Television-sponsored show, “The Scoop: How America’s AI Manipulates the Narrative,” has exploded in popularity. In an effort to refute US accusations of genocide in Xinjiang, the program cites a report published by Stanford University that “exposes” how the US has spread lies through “extensive networks of fake accounts” about social media platforms to influence global public opinion. opinion.

Asia Fact Check Lab discovered that the Stanford Internet Observatory report focuses on the spread of pro-Western propaganda in the Middle East through more than a hundred fake AI accounts. But nothing in the report backs up CCTV’s claims that the “Xinjiang rumors” are a “ridiculous…false narrative” perpetuated by the United States.

“The Scoop: How American AI Controls the Narrative” is a weekly program produced under the brand sponsored by CCTV Yu Yuan Tan Tian. The show can be seen on most major official media and web portals. His self-proclaimed goal is to find out why exactly people buy into these ‘ridiculous rumors’ about Xinjiang and to ‘expose’ America’s covert efforts to shape global public opinion through ‘vast networks of fake accounts’. spreading lies on popular social media sites. The program then describes forced labor reports in Xinjiang as “false” and uses a report from the Stanford Internet Observatory to back up its claims.

The program intersperses references to the report with interviews with three Chinese professors, aiming to expose how the US military and intelligence services use “AI facial recognition, personality profiles, fake accounts” to create and spread “lies”. The narrator claims to reveal the “American conspiracy…to invade both our land and our minds,” and urges viewers to exercise “independent judgment and logical thinking.”

The Stanford Internet Observatory is an interdisciplinary research project focused on exposing reckless use of social media. Since 2019, the project has published 34 reports analyzing the context and causes of social media account deletions due to user violations.

The specific Stanford study cited by The Scoop is titled “An Unheard Voice: Assessing Five Years of Covert Pro-Western Influence Operation.“Asia Fact Check Lab found it zeroed in on around 100 AI accounts in the Middle East and Central Asia suspected of spreading pro-Western propaganda. The majority of the accounts were located in Afghanistan and Iran, with a few in Central Asian countries like Kazakhstan. In total, there were 81 accounts on Facebook, 46 on Twitter and 26 on Instagram. The account languages ​​were a mixture of Turkish, Russian and Arabic, without Chinese or English. The goal was to “continuously advance the interests of the United States and its allies; while simultaneously fighting Russia, China and Iran” using deceptive tactics to spread pro-Western rhetoric in the region.

For example, after the Russian invasion of Ukraine in February, accounts posted a slew of criticism against Russia, sometimes reposting related reports from outlets such as Voice of America and Radio Free Europe. Social media sites deleted the accounts after finding they were generated by AI technology.

The Stanford study mentions “Xinjiang” and “Uyghur” only three times: once in an overview of active accounts in Central Asia, once when mentioning two AI accounts posting information on “genocide” and ” re-education camps” in Xinjiang, and once in a photo caption detailing a post from the same two accounts. Critically, the report does not argue for or against the validity of the information disseminated by these accounts from Xinjiang. 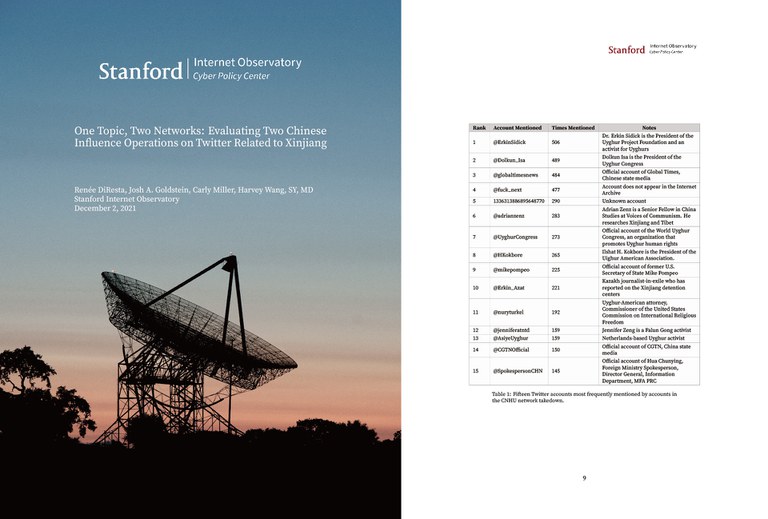 This second report details how the Chinese government is orchestrating thousands of fake accounts to spread false narratives and deny its atrocities in Xinjiang. Released in December 2021, the report calculates that in recent years the Chinese government has created more than 30,000 accounts on Twitter, categorizing them by time and type. In 2021 alone, the number of Twitter accounts found and suspended for spreading ‘false stories’ about Xinjiang rose to 2,128. Report highlights findings regarding human rights abuses man in Xinjiang published by various international organizations and mainstream media, including the United Nations, Amnesty International, New York Times, Wall Street Journal, CNN and Reuters. He then showed how these accounts have systematically attempted to use propaganda-fueled defamation tactics in order to coerce global public opinion.

“The Scoop” misleads viewers into believing that the Stanford report it refers to supports the official Chinese government narrative regarding Xinjiang. However, the results of the referenced and unreferenced Stanford reports not deny the facts of surveillance, oppression and forced labor in Xinjiang. On the contrary, they both show that these facts exist and expose the Chinese government’s attempts to cover them up.

In the absence of marked political tendencies, tThe series of studies published by Stanford Reports focuses on technical analysis, researching both the methods and results used to disseminate propaganda information on social media. The reports themselves lack strong political tendencies. They analyze everything message with propaganda message with potential political motives or intent to influence public opinion, whether the source is Chinese or American. The results of these studies not deny the facts of surveillance, oppression and forced labor in Xinjiang. On the contrary, they both demonstrate the existence of these facts and expose how the Chinese government is trying to conceal them.

1. The scoop: how American AI is manipulating the narrative

Asia Fact Check Lab (AFCL) is a new branch of RFA, created to combat misinformation in today’s complex media environment. Our journalists publish daily and special reports that aim to refine and deepen our readers’ understanding of public issues.