Road signs are an integral part of the iconography of American infrastructure. American road shields are probably the most well-known mass-produced piece of aluminum in the country. However, the countless green signs that dot every artery are a subtle staple for millions of journeys, from daily commutes to vacation trips. These provide all the necessary information to navigate the system, such as upcoming rides and mileage to further destinations. Additionally, the design of these signs is largely the same since the inception of the Interstate Highway System. Yet why was green chosen as the official color?

According Arizona Department of Transportation, green is used because it is a “cold” color. The green background of the sign tends to blend in with the greens, blues and browns of the natural landscape, while providing a great contrasting surface for white text. John LaBarbera, an ADOT public information officer, said: “It blends in enough to be considered part of the landscape, but stands out enough to notice when you need it.” This explanation from ADOT covers the intuitive reasoning behind color choice.

The green standard for traffic signs derives from Uniform Traffic Devices Handbook (MUTCD). The first edition of the MUTCD was published in 1935 by the American Association of State Highway Officials (now AASHTO), a standard body composed of representatives from each state department of transportation. The initial manual focused primarily on road markings, black-on-yellow warning signs, and black-on-white regulatory signs across the country. There was no standard for guide signs, as long-distance road travel was still not as common as we find it today. Travelers had to use route markers and their own maps.

Guide signs have been officially standardized as panels with a white background on green in 1954, two years before the passage of the Interstate Highway Act. This important amendment was included in a 15-page supplement to the 1948 edition of MUTCD. This supplement also required stop signs to be in white text on a red background. Prior to this change, stop signs could be black or red text on a yellow background, consistent with other warning signs.

Guide signs were officially standardized as white-on-green background signs in 1954, two years before the Interstate Highway Act was passed. This important amendment was included in a 15-page supplement to the 1948 edition of MUTCD. This supplement also required stop signs to be in white text on a red background. Prior to this change, stop signs could be black or red text on a yellow background, consistent with other warning signs. AASHO avoided red panels in the 1930s because fade-resistant red paint finishes did not yet exist.

G/O Media may receive a commission 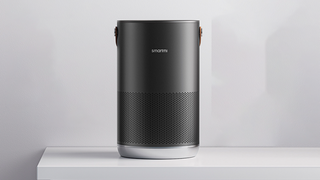 Lowest price ever
In 20 minutes, it will filter and absorb particles in the air with its 360° absorption HEPA filter.

The 2009 edition in progress Uniform Traffic Devices Handbook lists the standard for the color of guide panels in section 2D.03.02:

Without this standard, the United States could have ended up with a kaleidoscope of signal colors. Arizona once even experimented with direction-based color-coded signs. Blue for westbound signs, brown for eastbound signs, orange for northbound signs, and green for southbound signs.