Original works, large format projection and interactivity combine at the Fashion District to explore the universe of the anonymous street artist.

Get our weekly picks of what to do this weekend and the latest in Philadelphia’s arts and entertainment scene. 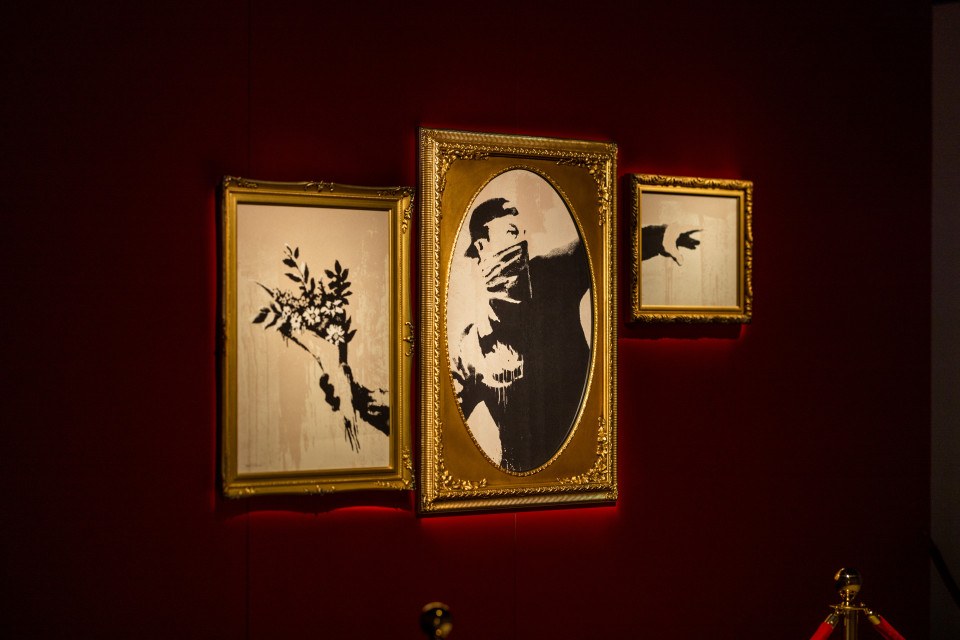 The work of elusive and anonymous street artist Banksy comes to Philadelphia in an immersive, multi-sensory exhibition featuring original works, projections, virtual reality and more to immerse you in his world. Through Jan. 31 at Philadelphia’s Fashion District, “Banksy Was Here,” the “Unauthorized Exhibit” features more than 80 original works and installations, along with interactivity, in galleries that pay homage to themes, works and in the artist’s sense of chaos, satire and controversy.

John Zaller, executive producer at Exhibition Hub, curator and producer of the exhibition, told me that they chose Philly for the premiere of “Banksy Was Here” because of our “gritty personality”, our celebration of street art and the rich public art collection.

A quote from Banksy opens the exhibit and Zaller commented that it reminded him of Philly:

In addition to nods to Philly, some of the graffiti elements recreated in the exhibit were made by local artists, and antique furniture came from Philly-area stores. 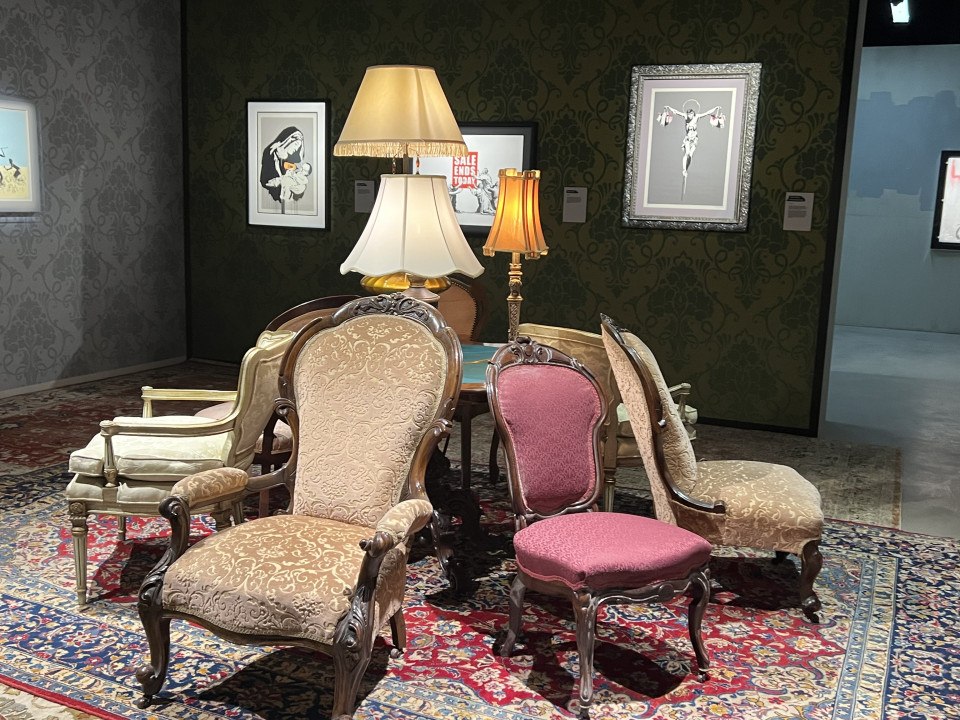 A gallery in “Banksy Was Here” / Photography by Laura Swartz

Speaking of this furniture, the exhibit communicates the themes of Banksy’s work viscerally, down to details like the decor. It begins with an entrance reminiscent of a hotel lobby, with ornate wallpaper and lush furnishings. This is repeated in the exhibit recreation of Banksy’s Walled Off Hotel, an actual hotel he opened in Bethlehem, Palestine, overlooking Israel’s West Bank Barrier Wall. 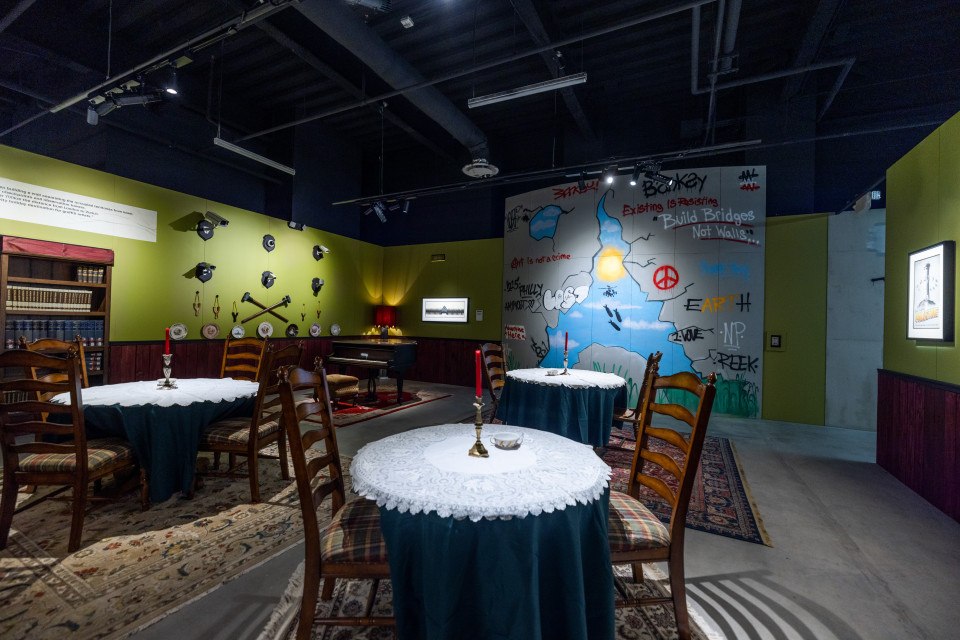 The juxtaposition goes further, Zaller says, to highlight an oft-repeated Banksy trope: “Old World context with New World problems, many of which were created by the Old World.”

And if you’re unfamiliar with Banksy’s work or the themes that run through it, the next room will quickly get you up to speed. This is the room where you will be immersed in projection, with an 11-minute animation showing you the story of the artist’s life (what we know, anyway), politics and major projects (all of which will be explored later in the exhibition). This piece is likely to be difficult for people with photosensitivity or other sensory issues, as well as young children who might find the images or noise discordant. 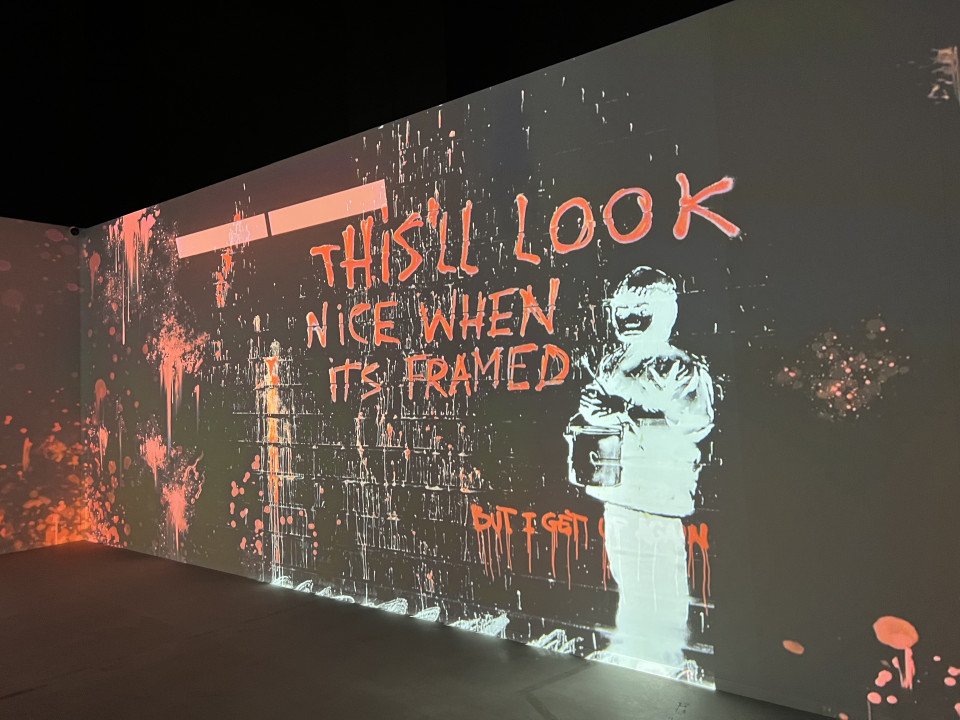 Wait, kids? Yes, although your mileage may vary, and you should be prepared to have some interesting discussions caused by the works. And dismalThe cheeky, twisted take on a Disney theme park might be a little startling, but that’s the point, isn’t it? Don’t expect Candytopia – the former resident of space – and you won’t be disappointed. I snuck in before the opening with my eight-year-old son, a city kid who knows museums well but also has a lot of energy. Interactive elements keep the experience fresh. 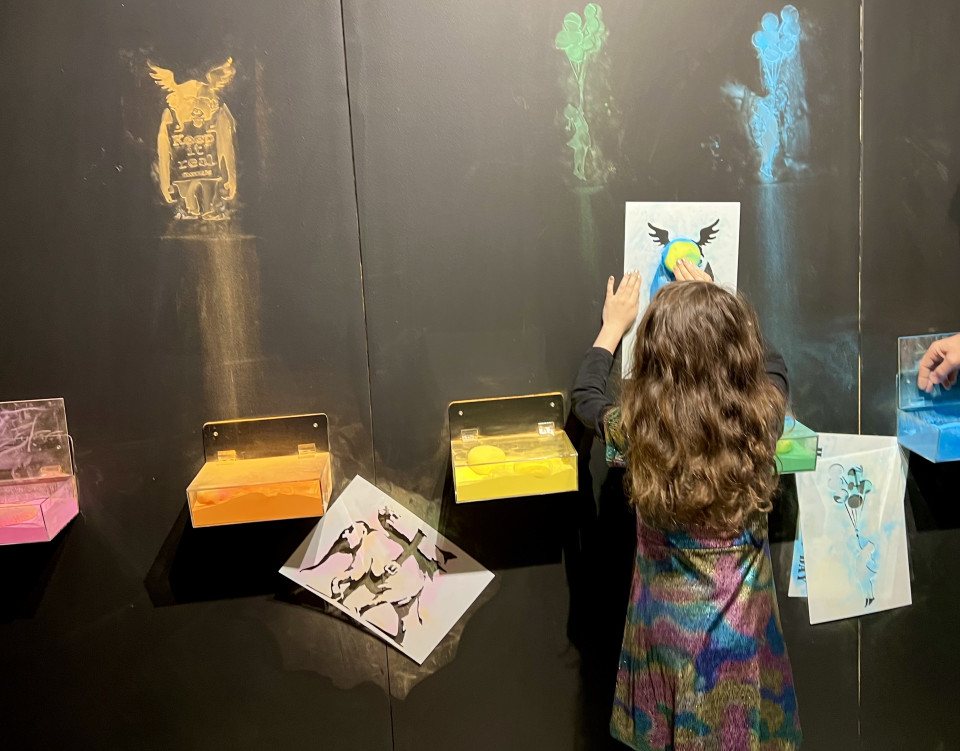 Stencil station in “Banksy Was Here” / Photograph by Laura Swartz

Expect plenty of photo ops – including iconic red phone booths you can walk into – and activities like a graffiti room where guests are encouraged to use Sharpies to make their mark on the exhibit. There’s also a “stencil station” with chalk dust bins and stencils so you can try your hand at recreating some of Banksy’s most recognizable and classic pieces. 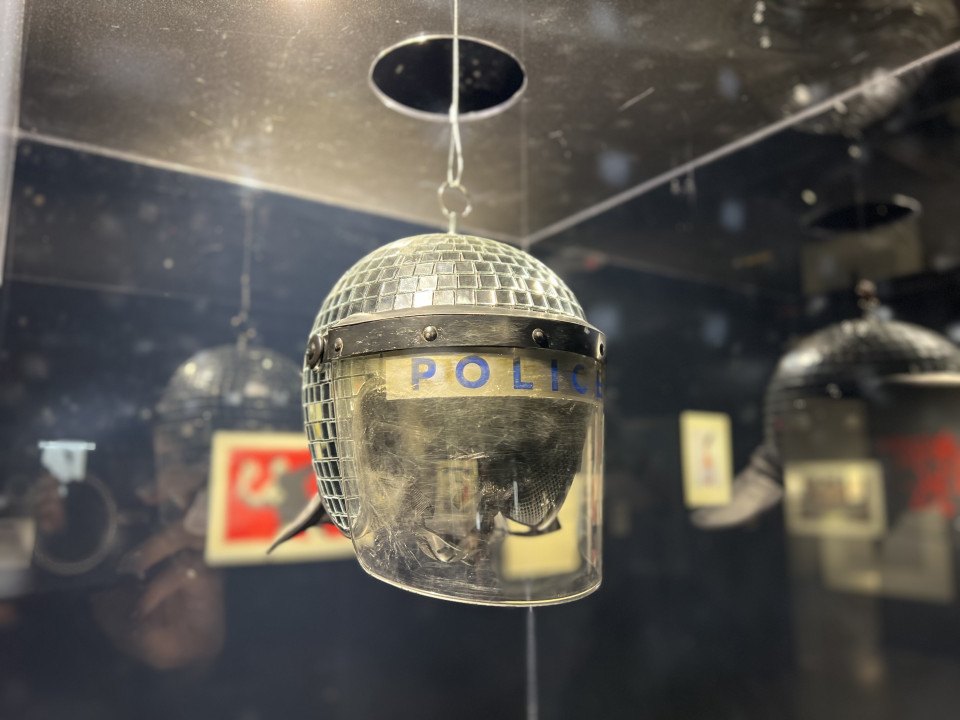 ball encountered by Banksy, made from an old riot helmet and a disco ball / Photograph by Laura Swartz

For another look at his creative process, you’ll find Banksy’s studio, painstakingly recreated in impressive detail based on the one he set up at the Bristol Museum for an exhibition in 2009, as well as images of the studio shown in his movie 2010 Exit through the gift shop. “Banksy fans will love ‘Banksy Was Here’ because of the dedication our team has taken to be as true to the artist’s approach as possible,” says Zaller. “From the moment you enter until the moment you leave, we place you in environments that evoke the authenticity and irony of Banksy’s works while curating the collection in a way that is accessible to everyone.” 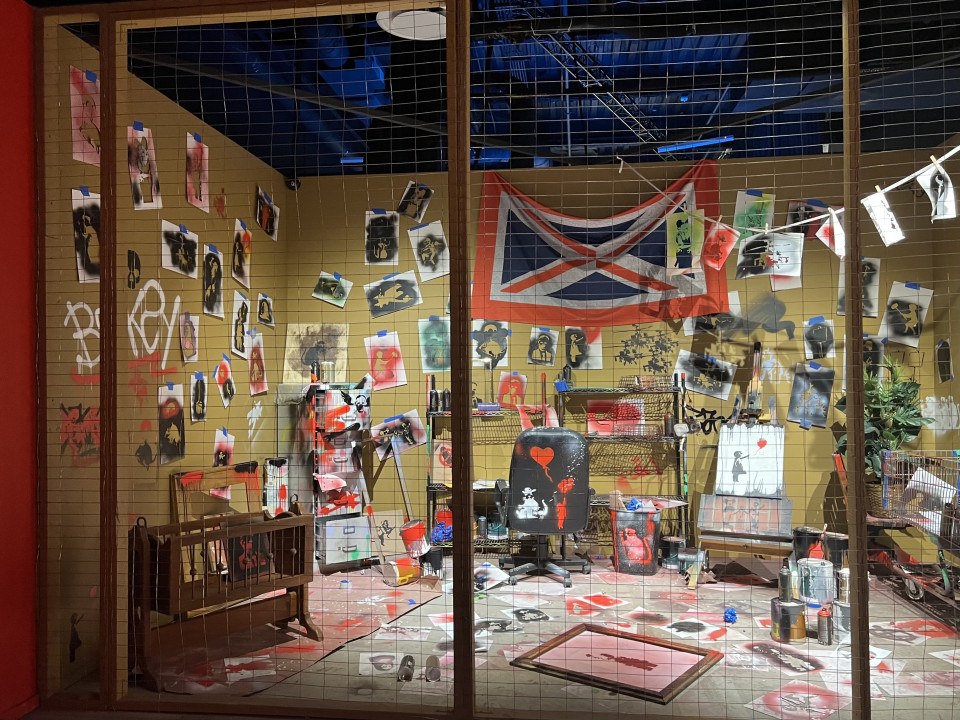 Finally, for yet another way to experience the world of Banksy, the exhibition concludes with an optional virtual reality walk through the streets of Bristol, as his work comes to life on the walls of the ramshackle cityscape. The VR element requires a VIP ticket, which will cost a bit more.

So why is the exhibit “unauthorized?” I admit that I was a little hesitant when I learned that. I love immersive and installation art when intentionally created as such (e.g. Wonderspaces), but I’m generally more skeptical of recent, Emily in Paris-has fueled the rise of high-projection “experiments” that repurpose work that has fallen into the public domain. Additionally, Banksy does not allow exhibitions of his art. “They might be crap, so please don’t come and ask us for a refund,” he wrote on his Pest Control Office website.

Much like the complex themes explored by Banksy, however, I considered contradiction. He is staunchly anti-capitalist, but he sells his work for millions and fires him for the commodity. (The exhibition has a gift shop, in case you were wondering. And yes, you go out that way.) And since the works in “Banksy Was Here” are on loan from private owners and galleries, the exhibition is, ironically, the only way the general public can hope to see them. He’s come a long way from the walls of Bristol, that’s what I’m saying. 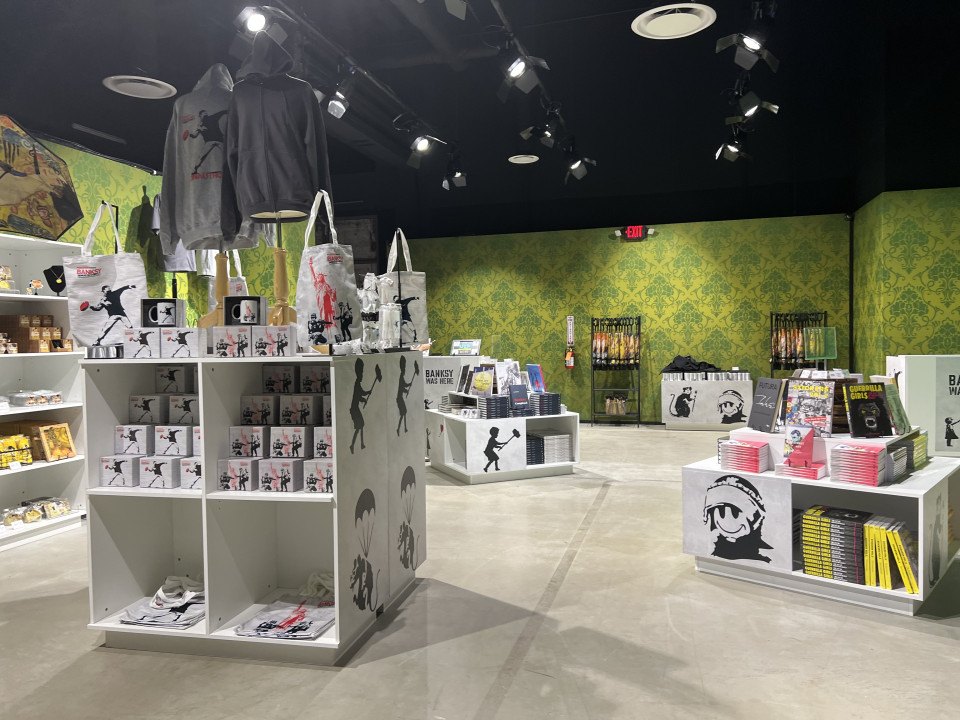 Details
“Banksy Was Here” runs from December 3, 2022 through January 31, 2023 at 901 Market Street in Philadelphia’s Fashion District. Timed tickets are on sale and cost $37.90 for adults (13 and older) and $22.90 for children 4-12. (To add the VR element, get the VIP tickets, which cost $49.90 and $29.90, respectively.) The exhibit is free for kids three and under, but kids this young won’t enjoy it. probably not. Walking around the two-story exhibit will take you around an hour to an hour and a half, depending on your speed and if you add the VR part at the end.