Trucking companies, construction companies and utilities use a Swanholm Technology solution to detect if workers are at risk or have fallen, and to issue alerts.

The warning vest is worn by truckers, construction workers and linemen in five European countries. The vest comes with battery-powered sensors that detect the movements of the person wearing it, as well as an integrated processor that analyzes this data on board before issuing an alert via Bluetooth Low Energy (BLE) to the smartphone of the wearer. worker. The smartphone uses the Alert Vest application to then transfer an SMS. The vest includes active printed lights that can automatically turn on or off, depending on the movements of the wearer. 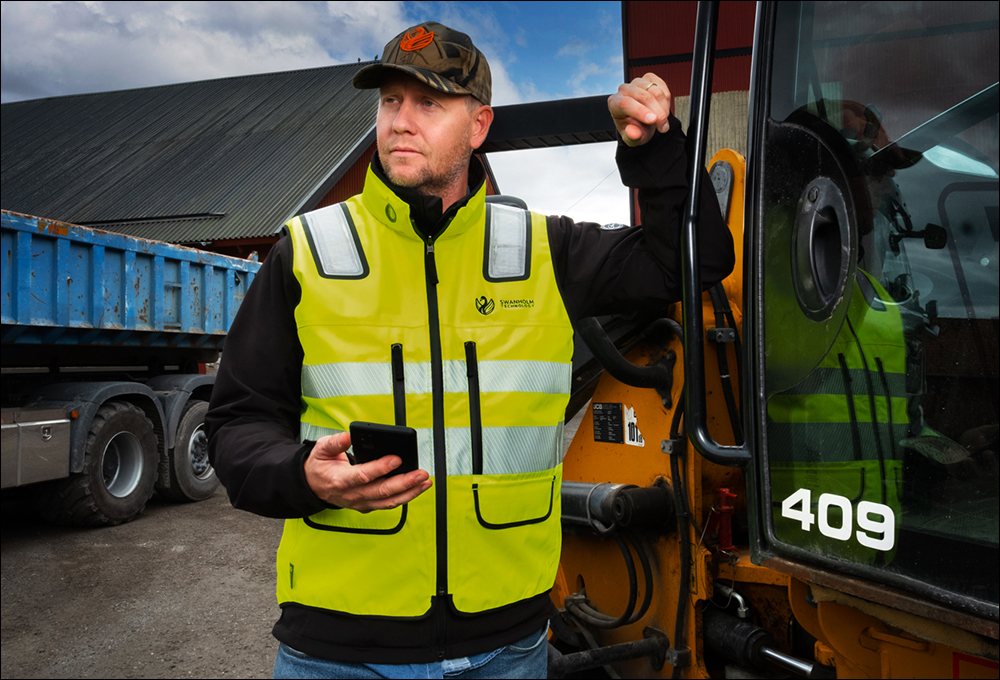 The warning vest is worn by truckers, construction workers and linemen in five European countries.

The solution was developed by Jonas Svanholm, who is the chairman and founder of Swanholm Technology, as well as the former director of digital affairs at Scania Group. The company, located in Bromma, Sweden, focused on offering connected safety products for truck drivers and other workers at risk. “The main goal is very simple: to make the end user safer and to provide owners with insight into how to create a safer working environment,” says Svanholm. He started designing the vest while working for Scania.

“We had the task of examining why truck drivers had the highest death rate in Sweden among workers,” recalls Svanholm. According to a report by Arbetsmiljöverket, truck drivers had the highest number of fatal accidents among Swedish workers, with 66 fatalities between 2011 and 2020. Svanholm looked at where the risks are greatest and found that the cab is quite safe, while the greatest danger for drivers was when they were outside their vehicle. He decided: “Let’s build something with AI that helps people [as they move] around the vehicle.” 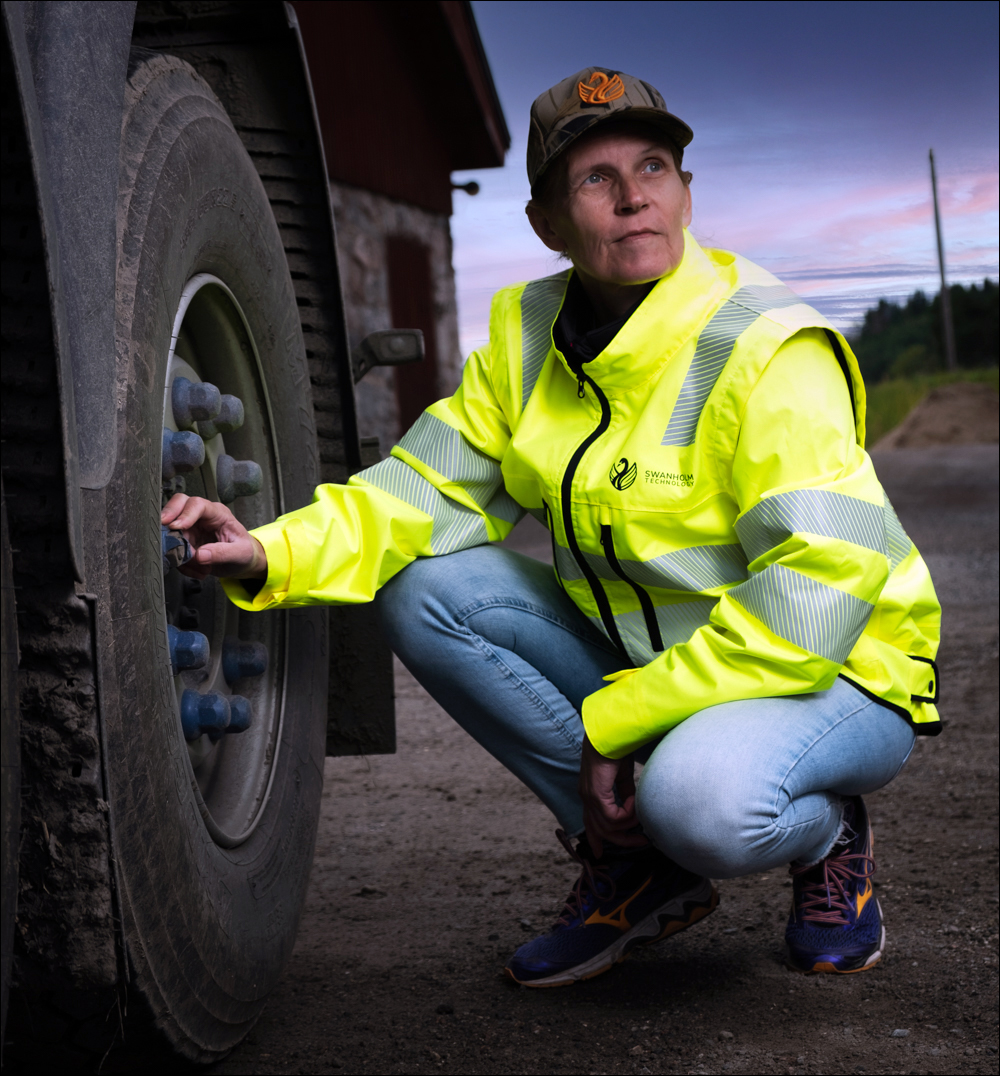 The greatest danger for drivers is when they are outside their vehicle.

Before designing a potential solution, says Svanholm, the Scania team worked with vest manufacturers, engineers, transport and construction companies and the end users who wear the vests. He also contacted Imagimob, which initiated a series of development iteration cycles that led to the creation of Swanholm Technology. The company has partnered with Imagimob to release the final product and bring it to market in 2020.

The Alert Vest provides three types of alarms: one to alert management of a fall, based on sensor analysis via AI; one second to activate manual alerts triggered by workers; and a timer alarm to notify workers if they remain in a hazardous environment beyond a limited time. The Bosch BMI-160 sensor in each vest includes an accelerometer and a gyroscope. The sensors are designed to be low power, consuming 180 μA for the accelerometer in full operation and 3 μA in suspended mode.

How the warning vest works

Each worker would typically be assigned a vest that they would wear whenever they were on a job site or driving a company vehicle. Each vest has a unique identification number that it transmits when reporting an incident. Most of the time, the vest’s alert system remains inactive. It does not transmit data until a predetermined threat threshold has been reached. For example, the vest could identify a fall of 1 meter and, depending on its programming, send an SMS. A company’s human resources department could access the worker’s identity linked to the vest ID, if the company chose to use the system in this way. However, Svanholm notes, the Alert Vest software does not track individuals, only the vest itself.

If a worker presses the button, the BLE transmission prompts a text message that help is needed.

The device is equipped with a timer that starts when a fall is detected, allowing a grace period for the user to reset the vest. During this time, the wearer hears warning beeps from the vest and can press a button to deactivate the alert if no assistance is required. This grace period is customizable but is often around 30 seconds. If the alert is not deactivated during this time, a message is sent to the user’s smartphone via BLE, containing the status of the alert and the unique identifier of the vest. The phone, running the Alert Vest application, then sends an SMS to an authorized official.

The connected vest is equipped with a push button on its front face, which allows the wearer to send an alert in the event of an incident, such as an operator getting stuck, stuck or stuck on a construction site without being able to call for to help. If a worker presses the button, the BLE transmission prompts a text message that help is needed. With each alert message, the data is linked to the individual’s GPS location captured by the smartphone, allowing officials to quickly dispatch help to the right place.

Receive updates over the air

The system can be customized to a company’s specific needs. For example, users can write their own message for a supervisor to receive, and they can change the settings that will trigger an alert in the first place. The Alert Vest costs around $400 individually, but the price is lower when the vests are purchased in bulk.

Vests are made affordable through engineering efforts, according to Anders Hardebring, CEO and co-founder of Imagimob. This includes AI and edge-based computing so that the vest only transmits an alert when its built-in processor confirms that an event has occurred. “The actual drop detection is on the edge,” Hardebring explains, “with on-chip machine learning. Therefore, [the vest is] does not send sensor data, it sends classification.” 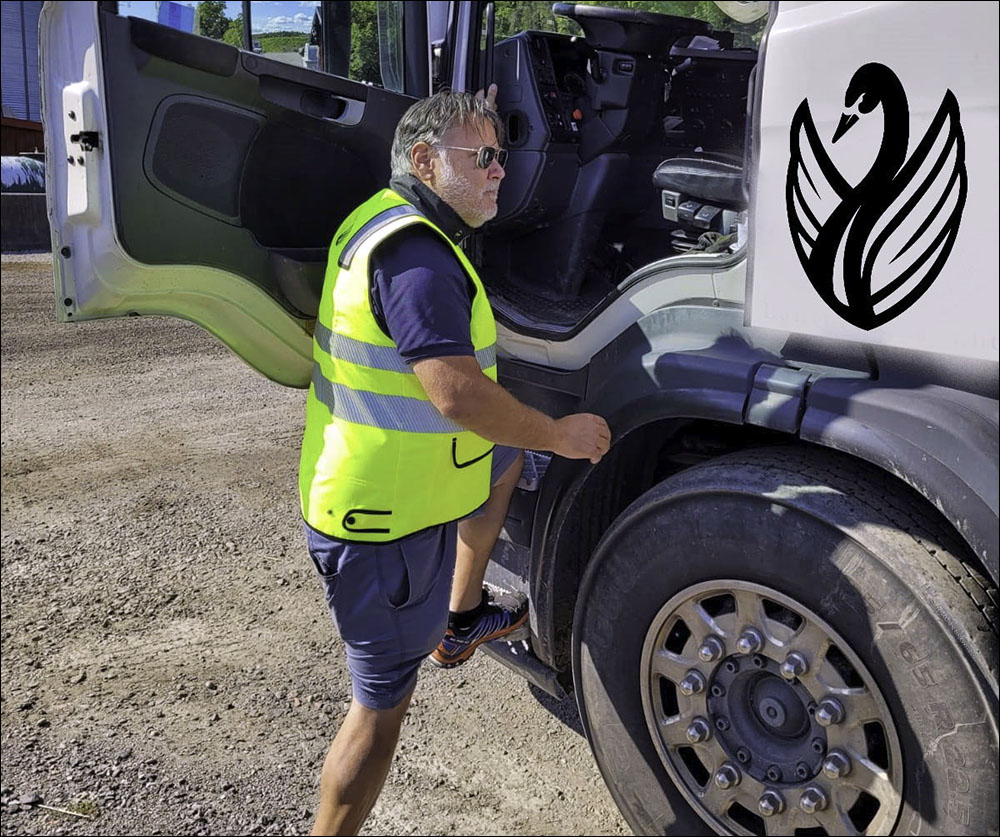 If the system determines that a driver has exited a vehicle, this movement may turn on the vest light.

Future versions of the system could use AI and machine learning to learn wearer behaviors and adapt responses accordingly, Hardebring says. In all versions, however, the devices are intended for use without worker identification. “One of the important features of the system is privacy,” says Svanholm. “When we talk to customers, one of the first questions they ask is privacy. [and not] follow the person.” He adds, “That’s something we don’t want to do.”

The technology can detect movement which triggers the illumination of printed lights built into the vest. If the system determines that a truck driver has left the vehicle, for example, due to a drop in elevation, this movement may turn on the vest light. Once the driver is back inside, the light goes out. Thus, if a driver leaves the truck while it is on the side of the road, passing cars will be automatically warned by the luminous vest. Hardbring says there are three classifications in the model that the vest’s AI system looks for: “Does the driver enter the truck, exit the traffic truck, or fall?”

Different versions of the solution could detect other events, Svanholm. This could include if a worker stops moving completely, indicating that they may have a medical condition or have been injured. To allow for system changes and upgrades, the vest can receive over-the-air updates via Bluetooth. Additionally, other sensors could be added to detect the presence or elevation of chemicals. For example, if a worker climbed to a specified height, the vest could detect that elevation and trigger a reminder for the worker to put on their safety harness.

If companies wanted specific data about a user’s location, they could deploy BLE beacons in areas such as construction sites. The beacons would then receive transmissions from the vests and thus pinpoint their locations. “We can customize the solution,” says Svanholm. The focus for the company, however, is to help its customers solve specific problems, rather than just introducing new technology to a company’s worksite.

So far, the company has worked with clients in Finland, Germany, Sweden, Denmark and Spain. The goal, says Svanholm, is to continue to deliver the technology across Europe initially and then expand globally. “We would like to succeed here in Europe,” he says, “and then we would like to move to the United States” and beyond.