The storm now known as Hurricane Sandy developed in the western Caribbean Sea on October 22, 2012 and rapidly intensified. After wreaking havoc in Jamaica, Cuba, the Bahamas, Hispaniola and Bermuda, it moved north into the Atlantic, eventually making landfall as a “superstorm” just north of ‘Atlantic City, New Jersey, on the morning of October 29.

For three intense days, the storm impacted 24 US states, including the entire East Coast, with particularly heavy damage in New York and New Jersey. In New York City, streets, tunnels and subway lines were flooded and electricity throughout the city and beyond was cut off. The devastation shed light on research already underway at Stony Brook’s School of Marine and Atmospheric Sciences (SoMAS).

“We were interested in storm surges and flooding in New York long before Sandy,” said Brian Colle, professor and division head of atmospheric sciences at SoMAS. “New York City has had a hard time in the past, even with northeast cyclones, like the 1992 northeast that flooded part of the subway system. The metropolitan area had therefore dodged bullets before.

The question was not whether or not it would happen, but when.

SoMAS researchers generated data and developed a storm surge modeling system to predict water levels along the coast, including up to 20-30 meter grid spacing around New York. The initiative was led by Malcolm Bowman, a distinguished service professor at SoMAS and a world-renowned expert in coastal studies.

“We had done accurate simulations for past storms, including the 1992 northeast as well as Hurricane Gloria, where we were lucky to have it at low tide,” Colle said. “We had always warned people that it was only a matter of time before we had the type of storm that Sandy eventually was. It wasn’t a question of whether or not it would happen, but when.

Although Colle and his colleagues hired city officials, it became what he describes as a “boy who cried wolf” scenario.

“There wasn’t a lot of interest at the time, unfortunately,” he said. “We could try to pass on the risks, but we had no easy way to visualize what could potentially happen.”

That would change in late 2012 – shortly after Sandy’s arrival – when the Reality Deck, the world’s largest immersive virtual reality training ground, opened at the Center of Excellence in Wireless and Computing Technology. (CEWIT).

The Reality Deck gave Colle and other SoMAS researchers the opportunity to merge their storm data with the visualization capabilities offered by the Reality Deck. A state grant in 2012 helped initiate research to understand water level rise, as well as storm scenarios and the effect it has on the population in terms of people evacuating of these areas.

“We worked with SoMAS scientists to develop simulations of the ocean and activity in the ocean,” said Arie Kaufman, professor emeritus in the Department of Computer Science at the College of Engineering and Applied Science and chief scientist of CEWIT. “There are a lot of dynamic components in addition to the static ocean water level.”

Three years ago, the group received a grant from the National Science Foundation to develop flood scenarios using visualization and determine if they impact users’ perceptions of risk. Generally, these are ensemble simulations in which several scenarios with different parameters are analyzed and averaged, much like weather or climate forecasts. This produces results for several scenarios.

“We build them on the Reality Deck to get an immersive 3D representation with a map of the terrain overlaid, including man-made structures, roads and infrastructure,” Kaufman said. “We can see what could happen when an area like the Midtown Tunnel is flooded. It’s very realistic. The goal is to give emergency managers a representation of the city and what is going to happen. Currently they have a 2D “plan view”. They do not have a dynamic 3D representation. Our Sandy model was one of the first prototypes to do this. We can zoom in and show a realistic depiction of flooding that could occur in New York City down to building scale.

Colle’s group held workshops to present these visualizations and illustrate the dangers.

“We invited several emergency managers around New York and we went through a hurricane scenario,” he said. “This was a fictional scenario where our partners at NOAA’s National Weather Service for New York City presented a storm background. We showed them and then asked if this information would help in understanding the risk and areas vulnerable in their communities. 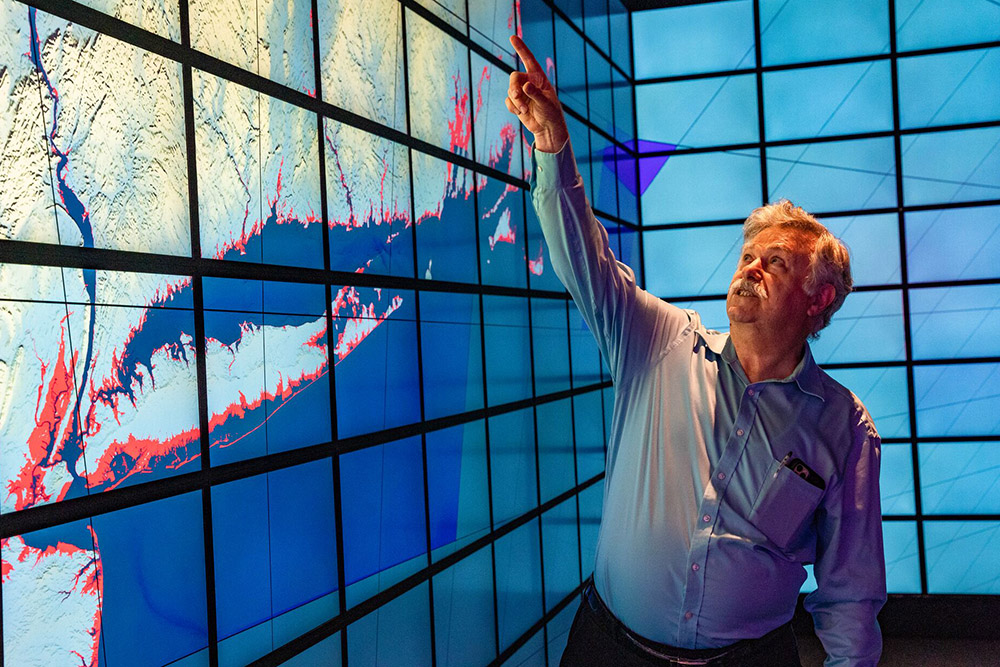 After seeing the visualizations, officials recognized the potential value of such simulations and offered other suggestions.

“They asked about incorporating building information into the model,” Colle said. “What if a user could click on a building and determine how many people are there and the demographics of that population? Can they evacuate to the nearest evacuation center? Will we be able to access all the important information people need to know? Since that workshop, our group has been working on collecting more datasets in addition to water level, buildings and infrastructure. We want to give emergency planners the tools to say, “Okay, this is the road we’re going to take” and “This is how we can move people in hospitals to another location”.

“Another challenge is how to communicate this visualization information with more community leaders and stakeholders in a flood-prone region, so we are planning a future workshop in 2023 to address this,” Colle added.

Kaufman also uses the models to show the potential effects of climate change.

“We’ve developed a global app that shows sea level rise because we know it’s happening,” he said. “We can look at hypothetical scenarios like what if the whole North Pole melts? If that happened we would get 90 inches of water. We can show you that on a map of the whole world and there are some amazing things to see. And it’s an important application, but it represents a static situation. With storms we are talking about dynamic situations with many components.

Kaufman describes the effort as a more tangible way to present uncertainty to emergency managers.

“Officials would be interested in these tools, but I think the general public would be too,” he said. “I’m sure they would want to know what’s going on and what could happen in various situations. And it really is a “visualization of uncertainty”. We don’t have all the solutions yet. But we are working on it. »