Siegrid Pregartner and Laura Borgerding are quick to note that they are PhD students in non-traditional pharmacology; Pregartner is an Army veteran and mother of two, while Borgerding is a former college professor.

The two also recently launched a startup, Janus AI, and designed an AI tool that helps in the early detection of Alzheimer’s disease. Their goal is to give patients with the disease more time to make health care decisions before the disease takes away their mental acuity and motor skills.

Students at USF Health Taneja College of Pharmacy have personal experience with Alzheimer’s disease and dementia. Together, they decided to use AI capabilities to ease the burden on other families and better prepare them for the inevitable.

“The goal of the software is that it will be fairly easy for doctors to use,” Pregartner began. “In fact, I’m hoping the doctor won’t have any input. This will just be a pop-up identifying patients most at risk of developing Alzheimer’s over the next two years.”

Rather than typical clinical or commercial pharmacy courses, they take courses that focus on pharmacogenomics, health economics, and entrepreneurship. The latter, taught by Dr. Kevin Olson, featured an artificial intelligence (AI) specialist who Borgerding says opened his eyes to his possibilities in the medical industry. 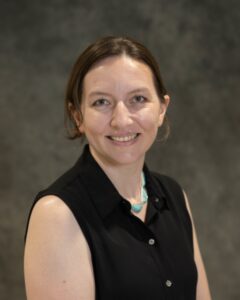 Siegrid Pregartner said she and her co-founder are “very driven women who are going to make this work”.

Pregartner noted that Alzheimer’s causes changes in the brain three to five years before more noticeable symptoms. The hope is that Janus AI can detect these impacts earlier.

Borgerding explained that emerging research shows that biomarkers can identify disease earlier through cerebrospinal fluid and blood. While the two plan to keep a close eye on new findings, Pregartner said Janus AI is meant to be non-invasive and use previously collected patient information and health records.

A computer program, she explained, typically uses algorithms to calculate numbers and solve equations. Conversely, the developers teach the AI ​​to find patterns, like those found in patients with early dementia.

“And ultimately, it’s so good at extrapolating data — beyond what humans can understand and what algorithms can do,” Pregartner said. “So if we train the model appropriately, it will find the patterns that we can’t find.”

This process, Borgerding added, is more convenient and efficient than a specialist combing through each patient’s medical records and trying to determine whether a patient is more susceptible to Alzheimer’s disease.

She thinks Janus AI could also give doctors more time to prescribe the right drugs that slow disease progression, something her grandmother doesn’t have. Going forward, Borgerding said early detection could also provide a window for patients while researchers develop treatments to reverse symptoms. 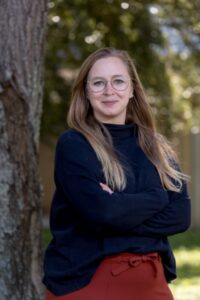 Laura Borgerding is also working on her Masters in Non-Pharmaceutical Technology.

The platform’s efficiency could also save healthcare and insurance providers money, which the two say helped their presentation at the Florida Blue Health Innovation Challenge in May. Their healthcare startup placed first in the competition and won $15,000.

The Innovation Challenge was the first opportunity for a doctoral student to present his company and his product. Pregartner called the win a complete shock, while Borgerding admitted she cried.

The contest director, Pregartner explained, advised to consider his audience. She realized that judges were potential customers and explained how Janus AI could save patients and insurers money.

“That’s ultimately what I believe won us the competition,” Pregartner said. “Because we are focused on how we improve patient outcomes and reduce the healthcare burden for everyone.”

Following the win – and after pitching Janus AI to local business leaders and university officials – the two were accepted by USF Connect, a leading technology and design incubator. The couple now have office space for their startup, a much-needed software mentor, and advice from other entrepreneurs.

The $15,000 prize serves as seed funding for Janus AI, while Pregartner said she has some ability to start the platform. However, she noted that the National Institutes of Health (NIH) provides about $2 billion a year for Alzheimer’s disease research.

The co-founders plan to focus on grant applications before considering seed funding, and technology patents are pending.

In addition to their doctoral studies and the launch of a start-up in the field of health technologies, the duo work part-time. Borgerding is also working on her master’s degree in pharmaceutical nanotechnology, while Pregartner has a supportive husband and two young boys at home.

They both expressed that their accomplishments are only possible with the help of an “extremely proud” dean, Dr. Kevin Sneed, and professors like Olson, Dr. Carol Fox and Dr. Teresa Ho.

“It’s something that keeps us going,” Borgerding said. “If we didn’t have that kind of support, we wouldn’t be able to do this and finish our program at the same time.